The solitude, the scenery, the sights – take in our wide open spaces and enjoy the Yukon’s stress-free, relaxed atmosphere.

The Yukon is located in northwestern Canada, next to Alaska. Drive the Alaska Highway from British Columbia, take a ferry up the BC/Alaska Inside Passage, or fly direct on daily jet service to Whitehorse. Scheduled flights depart Vancouver, Calgary & Edmonton, as well as Alaska, the Northwest Territories, Ottawa (via Yellowknife) and Frankfurt, Germany. Flying to the Yukon is as easy as any other major travel destination.

Once in the Yukon you can camp under the midnight sun. Fish at a four-star lodge. Float the Yukon River. Mush a dog team. Enjoy world class musicians and artisans. Relax on the deck of a secluded log cabin. Catch the gambling nightlife in Dawson City. Take home a “made in the Yukon” treasure. Whatever your Yukon dream, our site will provide you with the information, tips and ideas that will help make it a reality.

Freedom has never felt so good 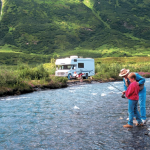 Unmatched beauty lies in the snow-kissed mountains, glacial lakes, fjords, rivers, valleys, and lush forests of Alaska. Visiting this majestic wilderness isn’t a question—but how you want to explore it may be a slightly tougher decision. With multiple trip options, you can make your Alaskan journey your own and ensure you return home with unique personal memories that will last a lifetime.

A Few Facts and Some Yukon History: 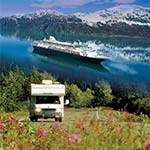 If you have ever wanted to experience the wilderness of Alaska without the restrictions of a scheduled tour, an RV trip might be perfect for you. Alaska has spectacular sights along its highways, including endless mountains, colourful glaciers and fresh or salt waterways. Explore at your own pace, spend time doing the things you want to do and don’t worry about time restrictions, you make your own schedule.