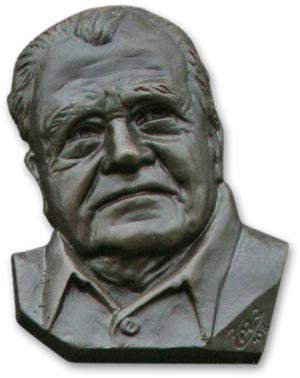 Fred arrived in the Yukon from England in 1922 at age 18 looking for his uncle, Stanley Goode. He never found him.

An early Dawson Daily News reporter viewed Fred as an exceptionally bright and energetic young man who would no doubt make good in the country. In his later years, Fred would be recognized for how significantly he had exceeded that prediction.

As did many, he started with simple employment, first as a labourer in a logging camp in Whitehorse, then in Dawson, setting bowling pins, delivering water by horse and wagon, and clerking in a grocery store. Other interests included being a member of the Fraternal Order of Eagles, the Independent Order of Odd Fellows and the Yukon Order of Pioneers.

By 1941, Fred had opened his own grocery store at the south end of town. Six years later he purchased a building on 3rd Avenue and established a grocery and general merchandise store. He was known for his generosity to customers, often giving credit to those out of work. The now legendary neon sign, the first one in town, advertised, “Get It At Caley’s,” and you really could get almost anything there.

Fred was known for his love of mining. When ever-optimistic prospectors approached him, he often provided them with a grubstake. Best known was his support of Dawson men who were looking for a different kind of “gold”- asbestos. They found a huge deposit at Clinton Creek, 50 miles below Dawson, and a mine operated for several years.

Quietly, over many decades, Fred paid property taxes on several historically important buildings that would otherwise have been demolished. Among them were the Dawson Daily News, the Red Feather Saloon and the Ellingsen Store Complex. He eventually sold them to Parks Canada and some have since been restored. He also donated to the Dawson City Museum over 400 artifacts and paper archives. The Public Archives of Canada placed on microfilm all the issues of the Dawson News dating from 1898.

In recognition of his preservation efforts, Fred received the Yukon Historical & Museums Association Heritage Award in 1981 and the Commissioner’s Award in 1982. He was posthumously inducted in to the Yukon Prospectors’ Association Honour Roll in November 1989.